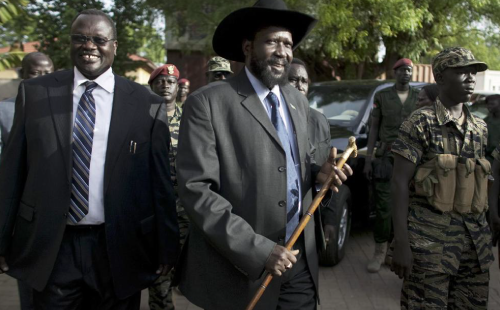 The South Sudan government and rebels have signed a ceasefire agreement after more than five weeks of violence in South Sudan.

The two warring parties signed a ceasefire on Thursday in a hotel in the Addis Ababa, Ethiopia as the fighting is due to come to an end within 24 hours.

The agreement is expected to be implemented within 24 hours of the signing, mediators said.

At the signing ceremony, the IGAD Chief mediator, Seyoum Mesfin said: “The crisis that gripped South Sudan is a mere manifestation of the challenges that face the young and fledgling state.”

“I believe that the postwar challenges will be greater than the war itself. The process will be … unpredictable and delicate,” he added.

The news of ceasefire was welcomed with great joy as the U.S. President Barack Obama, U.N. Secretary-General Ban Ki-moon and the U.N. Security Council.

Obama said on Thursday the ceasefire was a “critical first step” toward peace in South Sudan, but added that leaders needed to work to resolve the underlying causes of the conflict, and must quickly release political detainees.

“South Sudan’s leaders must demonstrate their sustained commitment to a peaceful resolution of the crisis,” Obama said in a statement, urging that “individuals who have committed atrocities are held to account.”

Since the fighting started on December 15, 2013, thousands of people have fled their homes to neighbouring countries and many killed.

More than 70,000 people have sought refuge at U.N. bases around the country after peacekeepers, in an unusual move, opened their gates to them.

UN Secretary General, Ban Ki Moon welcomed the news and urged the two sides to support and cooperate with the U.N. peacekeeping mission UNMISS and implement the ceasefire agreement immediately.

However, several diplomatic sources in New York said they were worried the killing could continue.

South Sudan won its independence from Sudan in 2011 after decades of conflict between the northern and southern Sudanese.